This chart looks at the Yield on the 10-year note on a weekly basis. Interest rates look to have peaked last October. Since hitting those highs, yields have declined 35%!

This large decline has them testing the 2017 lows and its 61% retracement level of the 2016 lows/2018 highs at (1). While testing the support level, momentum is now deeply oversold, hitting the lowest levels in the past couple of years.

Has the decline in yields/rally in bonds created an extreme in sentiment? Yes! 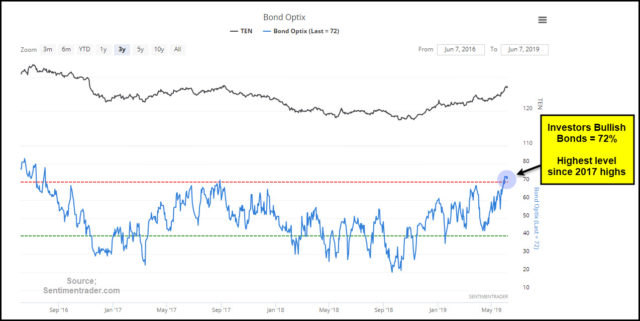 This chart comes from Sentimentrader.com. It reflects that many investors are bullish bonds ( nearly 72% bulls). When rates were hitting highs/bond lows in October of 2018, only 20% of investors were bullish bonds. The majority was wrong last fall, will they be wrong again?

Are interest rates bottoming/bonds topping at current levels at (1) in the top chart? Very possible.  At the very least, a short-term rally in yields/bond decline is due.

If yields continue to fall and break support at (2), they would be suggesting the economy is most likely going to slow down!

If yields would happen to rally, lagging bank stocks might catch a bid! This looks to be an important inflection point for yields, bonds and stocks!