Consumer Staple and Yields about to send key message to stocks? 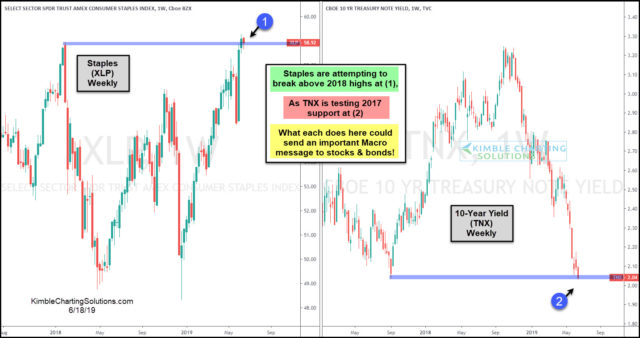 Could the Staples sector and the yield on the 10-year note be on the verge of sending an important message to the stock and bond markets? It sure looks that way.

Staples ETF (XLP) is currently attempting to break above the January 2018 highs at (1). If it does, it would be a breakout of the trading range that has been in play for the past 18-months, as it looks to have created a double bottom last year.

What would stock bulls love to see? Most likely a breakout by XLP at (1) and a rally by TNX off support at (2).

What would be of concern to stock bulls? A peak in XLP at (1) and a breakdown of support at (2).

In my humble opinion, the next big move by XLP and TNX will send very important messages to the stock and bond markets!