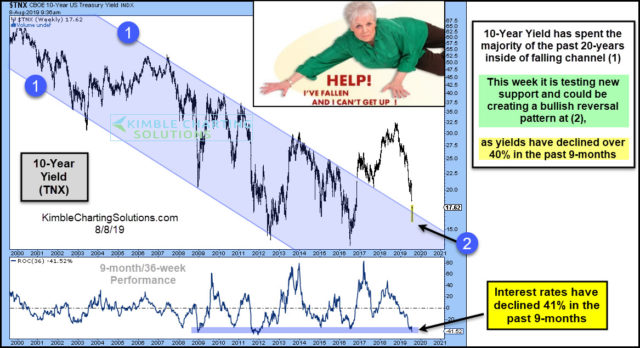 Interest rates have declined over 40% in the past 9-months. Could they be near a short-term low? Stocks most likely hope so.

This chart looks at the yield on the 10-year note (TNX) over the past 20-years. The majority of the past couple of decades rates have declined inside of falling channel (1). Two years ago yields broke above this rising channel and rallied 40% in less than a year.

The 40% decline in yields since October of last year has yields testing channel (1) as support at (2). While testing support, TNX could be creating a bullish reversal pattern this week at (2).

Over the past 20-years when yields have declined 40% in 9-months, they were closer to lows than highs. Will it be different this time?

According to Sentimentrader.com, bond bulls are easy to find at this time (75% bulls), which is the highest level since 2016.

Stock market bulls might receive good news if yields can find support at (2) and rally.