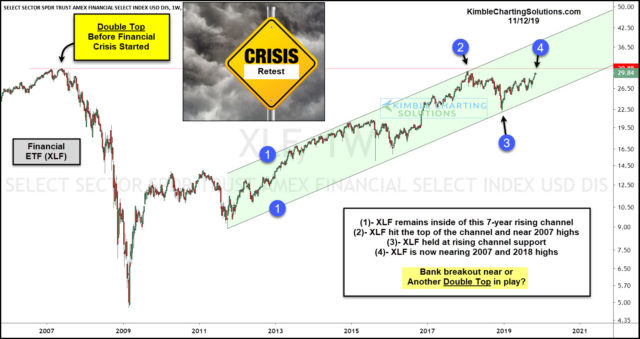 If the saying “So Goes The Banks, So Goes The Broad Market” is true, banks are facing a critical breakout/resistance test in my opinion.

This chart looks at Financials ETF (XLF) over the past 12-years. This chart reflects that a double top took place prior to the financial crisis getting started.

XLF has remained inside of rising channel (1) since the lows in 2012. It hit double resistance at (2), then it declined nearly 25%.

The decline then tested rising support at (3) and a strong rally has followed. The rally now has XLF nearing the Financial crisis double top and last years highs at (4).

Will XLF breakout above the old highs or is it creating another double top again?

What XLF does at (4), could well send important messages to the broad market and stocks around the world. Stay tuned friends, this looks to be a key price test!!!