Natural Gas Is Up 38% Of Late, Is It Just Getting Started??? 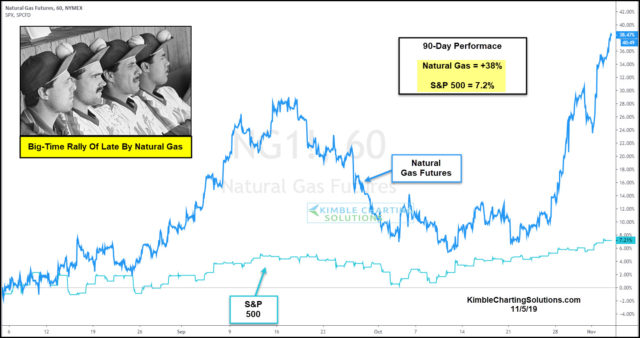 When it comes to top-performing assets, Natural Gas has done tons better, as it has rallied over 38% in the same time frame.

As Natty has screamed higher, is blast off about to take place or is it about to peak?

Over the long-term, Natural Gas has pretty much stunk it up! Currently is nearly 80% lower than its peak price in 2005.  This chart reflects that is is not much higher than the lows of 2012 either.

While it has been doing poorly, could Natty be forming a multi-year basing pattern? It is too soon to tell, yet it remains possible.

The chart reflects that it could be forming a multi-year bullish inverse head & shoulders pattern, with the left shoulder taking place back in 2012.

It could be forming a much smaller basing pattern/inverse head & shoulders over the past few months at (1), with a potential neckline breakout this week at (2).

In the short-term what is important? That a breakout is in play at a potential smaller neckline at (2) this week!