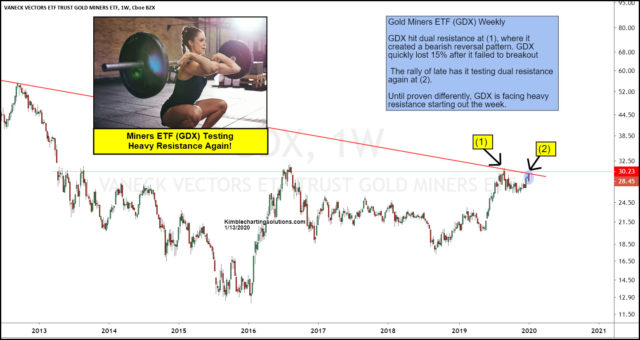 In September of 2019, Gold Miners ETF (GDX) testing long-term resistance at (1), and then it quickly declined 15%.

This resistance level has been heavy for GDX has it failed to break above this level twice in 2013 and once in 2016. Each time GDX peaked in those years, it fell very hard following breakout failures.

GDX is now testing the highs of 100-days ago again at (2), as well as falling resistance.

It double topped at this level back in 2013, then it proceeded to decline over 50% in the next couple of years.

Is it double topping again?

The current resistance/breakout test at (2), will most likely send a very important message about the future of GDX.

Keep a close eye on what GDX does here friends!!!