Will Junk Bonds Continue To Send A Positive Message To Stocks? 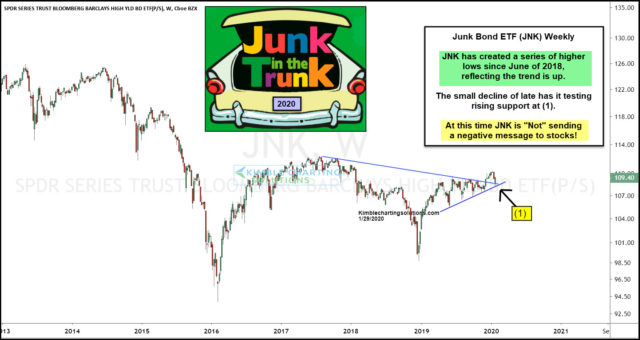 If the saying “So goes Junk Bonds, So goes stocks” is true, what Junk bonds do in the next couple of weeks could send an important message to stocks!

Junk bond ETF (JNK) has created a series of higher lows since June of last year. When JNK moves higher like this, historically it sends a positive message to stocks.

JNK has declined a very small percentage in the past two weeks, which has it testing rising support at (1).

So far JNK is not sending a negative divergence to stocks.

If JNK holds at support and rallies off (1), they continue to send a positive message to equities.

If JNK fails to hold at the dual test of support at (1), they would send a negative message to stocks for the first time in 6-months.

Keep a close eye on Junk over the next couple of weeks, as these bonds most likely will send an important clue to the next intermediate move is stocks.