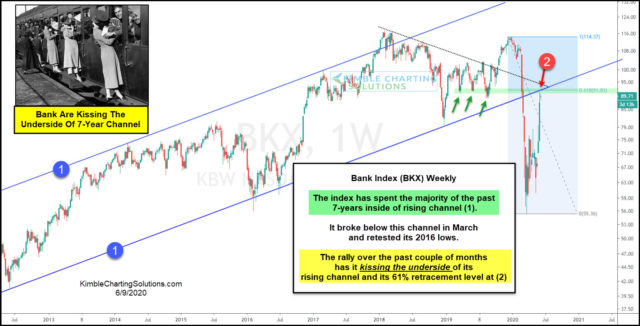 If Banks peak here would they send a caution message to the stock rally over the past couple of months? Yes!

This chart looks at the Bank Index (BKX) on a weekly basis since the summer of 2012. Since the lows in July of 2012, the index has spent the majority of the time inside of bullish rising channel (1).

The Bank index has been weaker than the broad market since January of 2018, where it attempted a breakout of its rising channel. Earlier this year banks broke below rising channel (1), which sent the first bearish message from banks in 7-years.

Banks hit 2016 support in March and a strong counter-trend rally has taken place. The recent rally has the index kissing the underside of the rising channel at (2).

At the same time, the index is testing old support as new resistance for the first time in years, it is also testing its 61% Fibonacci retracement level of the large decline this year at (2).

The 91 level at this time comes into play as resistance for the bank index. If banks would start turning lower and experience selling pressure at this resistance zone, they would send a concerning price message to the broad market.

Stock bulls would receive a quality bullish message from banks if the index succeeds in breaking above the resistance zone at 93.

Keep a close eye on what the bank index does here friends, as it could send a very important message to the broad markets.