Tech Leader Hitting Brick Wall of Resistance and Going To Reverse Its Trend? 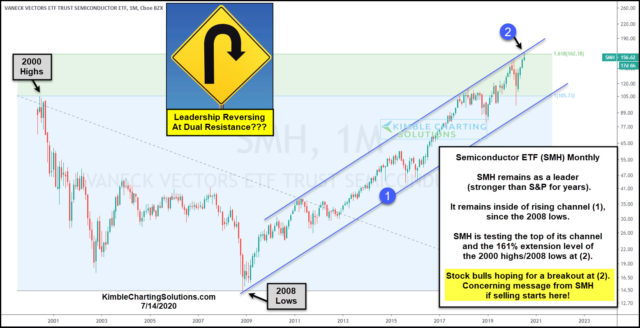 Is leadership running into a brick wall of resistance and about to pull an important reversal? A strong bullish trend looks to be experiencing an important breakout test!

The trend for SMH remains up as it has spent the past 10-years inside of rising channel (1).

This chart looks at Semiconductor ETF (SMH) on a monthly basis since inception. Fibonacci was applied to the 2000 highs and 2008 lows.

The rally off the March lows, which tested the 2000 highs, has it currently testing the underside of its 10-year rising channel as well as its 161% extension level at (2).

Nothing of late suggests that SMH will top at current prices, as the trend remains strongly up. If a breakout takes place at this inflection point, it will send a very bullish message to the broad market.

With this being a monthly chart, if SMH would happen to experience selling pressure at dual resistance and close out the month a good deal lower/create a bearish reversal pattern just below dual resistance at (2), an important reversal could be at hand.

Where SMH closes out the month will send an important message to Tech stocks and the broad markets as well!