Muni Bonds Could Be Double Topping, Despite Fed Intervention 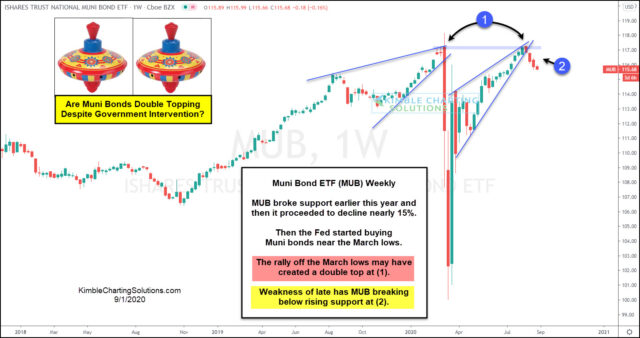 In March, after a 15% decline in Muni bond prices and as part of its response to COVID-19, the Federal Reserve announced it would for the first time in its history enter the municipal bond market.

Following the announcement of the Feds purchasing plans, Muni bonds experienced a very strong rally, taking them back to the highs that took place earlier this year.

This chart looks at Muni Bond ETF (MUB) on a weekly basis.

The rally off the March lows came back to test the highs of earlier this year, where MUB may have created a double top at (1).

Weakness in MUB of late has it breaking below support at (2).

If MUB has double topped, it could well be suggesting that the long-term bull market in bonds could be coming to an end, despite the Fed pumping historical amounts into this market!