Silver Will Be Stronger Than The S&P For Years To Come, Says Joe Friday 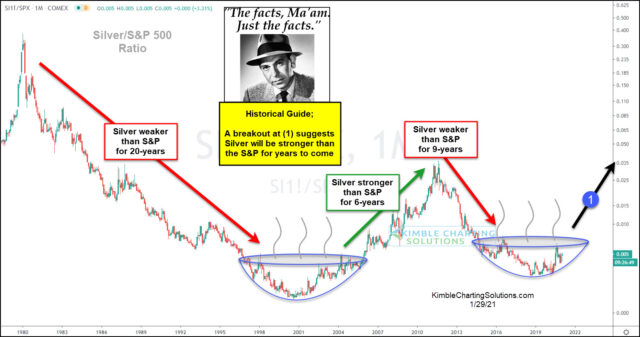 Is Silver about to outperform the S&P for years to come? This pattern suggests it sure could.

This chart looks at the Silver/S&P 500 ratio over the past 40-years, highlighting several long-term trends.

Silver was weaker than the S&P 500 from 1980 until 2000. For nearly 6-years, the ratio created a bullish bottoming pattern. Once the ratio broke out, Silver out-performed the S&P for the next 6-years.

The ratio peaked in 2011 as Silver was weaker than the S&P for the following 9-years.

Over the past 6-years, the ratio could be forming another bullish bottoming pattern.

Joe Friday Just The Facts Ma’am: A breakout of the top of this bullish pattern at (1) would suggest that Silver outperforms the S&P 500 years to come.