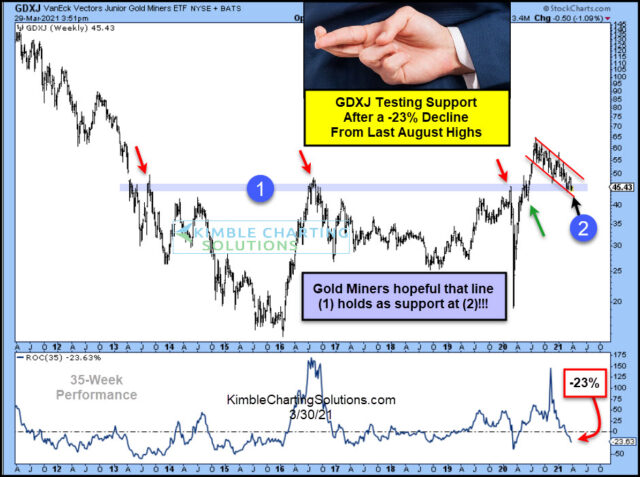 Gold mining stocks have struggled since last August, as they have lost nearly 25% in price, putting them into the bear market territory.

Is this enough of a decline? Gold miners have their fingers crossed this critical support holds right now!

The chart looks at Junior Gold miners ETF (GDXJ) over the past 9-years on a weekly basis. Since August of 2020, GDXJ has created a series of lower highs and lower lows, while declining nearly 25%.

Line (1) comes into play at the $45 level. It has been resistance and support several times over the past 8-years.

The 35-week decline now has GDXJ testing line (1) as support at (2). The pattern since the August highs has the potential to be a bull flag. If this pattern is correct, support must hold here and now!

If this support fails to hold, holding onto GDXJ could be very painful in the weeks to come, as the next support level is a large percent below current levels.