Semiconductors Could Send Most Important Message Of The Year, Says Joe Friday! 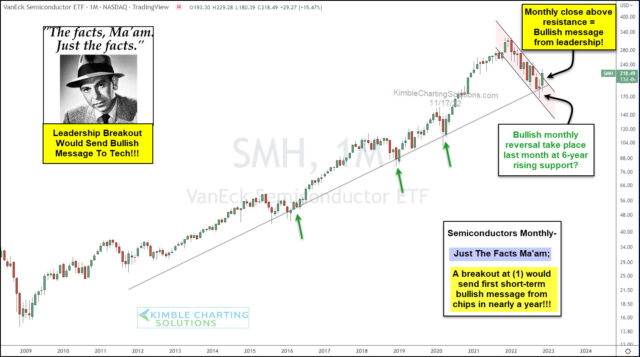 Over the past decade, we have written A LOT about the importance of following the technology sector as a leading indicator of the health of the market. And, in particular, the Semiconductors.

Why? Because the Semi’s have been an important leader of the bull market since the 2009 low.

And, once again, it appears that the Semi’s may be trying to tell the market something important.

Today, we revisit the “monthly” chart of the Semiconductors ETF (SMH). As you can see, the Semi’s have been in a strong up-trend. But late last year, the Semi’s tipped off the market that something was wrong and began heading lower.

This selloff brought SMH back down to its 6-year rising support before reversing higher last month. This reversal is seeing follow-through this month and has the Semi’s testing the topside of its 1-year downtrend channel.

A breakout above this 1-year bearish channel would be the first short-term bullish message in nearly a year.

In my humble opinion, this is a big test for technology leadership.

The Facts; What Semiconductors do by the end of the month could send one of the most important bullish/bearish messages of the year!!!