If one takes the highs of 1987 and the lows of 2003 and ties them together and then projects a line into the future, you get line (1). The Dow hit line (1) and its Fibonacci 161% level in May and the Dow could make no more upward progress after that!

Speaking of momentum, it reached lofty levels at the same time! Momentum recently hit levels last seen in 2000 and 2007.

This was a price point where the Power of the Pattern suggested that “Slow Money members” lighten up on exposure to stocks.

The decline over the past 30-days took the Dow down to the support, of a 4-year rising channel.  Not only did the Dow hit channel support this week, many of the major markets around the world did too. See Global Bull markets tests support HERE

The swift decline really concerned investors, check out the rare situation in the Fear index below. 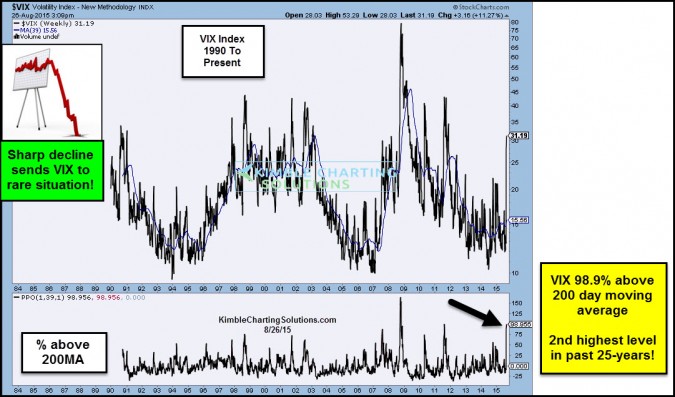 Did the swift 10% decline cause fear levels to reach lofty levels? It appears so!

Big Picture…. Heavy resistance at the line (1) in the top chart, which dates a back to the 1987 highs and 2003 lows, remains in place as well as the Fibonacci 161% extension level. Momentum on a monthly basis is still lofty. With support at hand and fear spiking higher, a bounce is due off support.

With resistance and lofty momentum in play, bullish investors DO NOT want the bottom of the 4-year rising channel to give way!!!

If you would like to stay abreast of big picture thoughts from a Power of the Pattern perspective, I would be honored to have you as a Global Dashboards member.      Sign Up Details Here