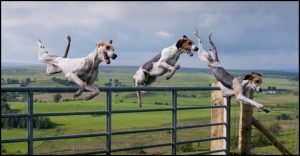 Over the past couple of years, the Energy sector has declined a good deal more than it has rallied. Of late, some assets in the Energy sector, has been moving upward and have been jumping over key resistance levels! Crude Oil now following energy stocks, hopping over resistance?

Since July the Power of the Pattern has been sharing with Premium & Sector Members, that the Energy complex looked to be forming several reversal patterns, which appeared to be taking the shape as bullish inverse head & shoulders formations.

XLE, XOP and OIH at (2), all look to be breaking above neckline resistance. Crude Oil is actually lagging the others at (1). A breakout by Crude Oil at (1), we feel would be good for the other three.