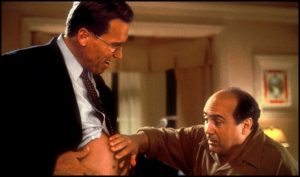 The above picture comes from the movie Junior, which was released back in 1994. The film follows Alex Hesse (Arnold Schwarzenegger), an Austrian-American scientist who agrees to undergo a male pregnancy as part of a scientific experiment The picture reminded me of what “Junior Mining Stocks” are attempting to do at this time, which is breakout! 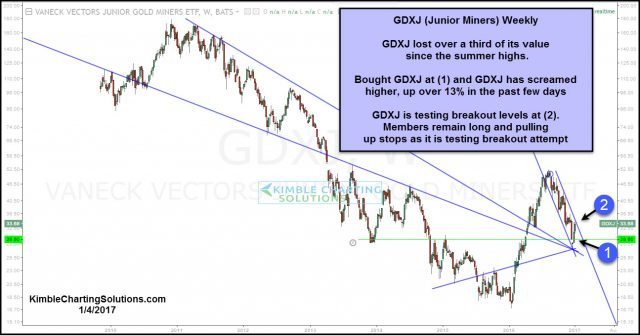 As mentioned above, after hitting highs this past summer, sellers stepped in and drove GDXJ down hard, as it lost nearly a third of its value, in a few months time.

Premium and Metals Members bought GDXJ at (1), where a support cluster seemed to be in play, after this large decline. So far, GDXJ has screamed higher, gaining nearly 13% since the purchase at (1).

Now GDXJ is testing falling resistance at (2). What GDXJ does at (2), should tell us a good deal about the next intermediate move in mining stocks. Due to this falling channel in play at (2), members are pulling up stops, to protect gains.

If the metals complex and opportunities they present are of interest to you, we would be honored if you would become a member of one of our services, that covers this sector in depth.