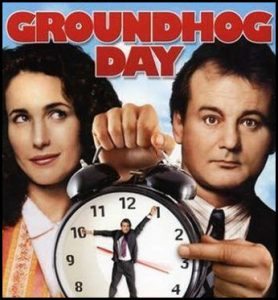 The movie Groundhog’s day, was released back in 1993, starring Bill Murray. Murray plays an arrogant Pittsburgh TV weatherman who, during an assignment covering the annual Groundhog Day event in Punxsutawney, Pennsylvania, finds himself caught in a time loop, repeating the same day again and again.

Speaking of repeating the same thing over and over again, below looks at the Silver/Gold ratio over the past 30-years.

Groundhog day again in the Gold/Silver markets?  Premium and Metals members are aggressive long the miners space, owning GDXJ at this time. If you are interested in Power of the Pattern analysis on Gold, Silver or mining stocks, I would be honored if you were a member.