Banks Stocks could under perform for years (Update)

90-days ago Joe Friday shared that if history was a guide, banks could under perform the broad market going forward. The chart below was shared on 12/23/16 (See Post Here). It highlighted that since the highs in 2007, when the Bank/SPY ratio became very over bought, banks lagged the broad market for a good while.

Since the highs in the financial crisis, each time banks have attempted to out perform the S&P and momentum was very high, banks struggled going forward and the broad market didn’t have tons to brag about. Below looks at the performance of the S&P, Banks (XLF) and Regional Banks (KRE), since the Joe Friday post on 12/23/16. 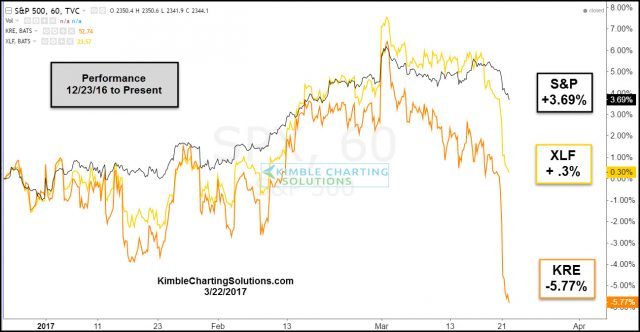 The post election “reflation theme” needs the banks to do well going forward, keep up with the S&P or out performing it. If banks would continue to under perform or decline in price, it will raise questions if the reflation theme has peaked out.

Really important what banks do going forward friends, keep a close eye on them! The reflation theme wants the Bank/SPX ratio (top chart) to breakout! If it would, positive price message for Banks and the bullish case for stocks.