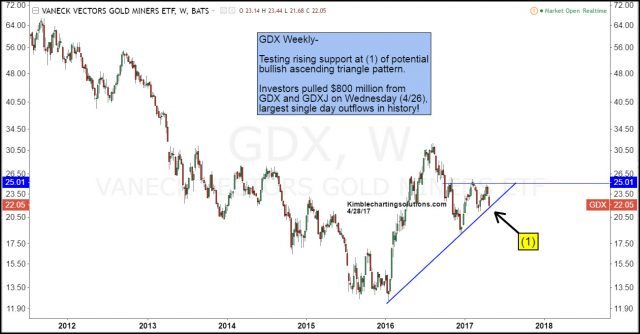 The long-term trend since the highs in 2011 is down (lower highs and lower lows). The 15-month trend appears to be higher, as GDX has created a series of higher lows, since early 2016.

Joe Friday Just The Facts; GDX is testing 1-year rising support at (1), which could be support of a bullish ascending triangle pattern. Two thirds of the time, this pattern suggest higher prices.

It is way too early to tell if investors panicked on Wednesday (huge outflows). From a Power of the Pattern perspective, what takes place at (1), is very important for the miners space, more important than outflows.

If you are a fan of the Gold, Silver and Mining space, we would be honored if you were a Premium or Metals Member.