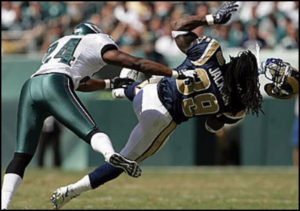 Most retail stocks have been something to avoid this year, as the majority of them have been hard hit! Could a trend change be about to take place? For sure a big test for them is in play right now! 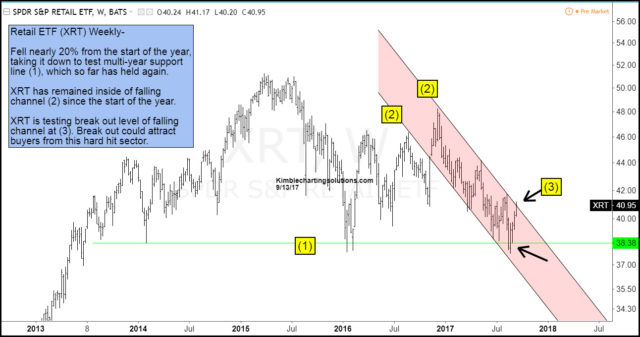 The decline in XRT that started the first of the year, took it down to test 3-year horizontal support at line (1), inside of falling channel (2), where a reversal pattern took place. Over the past month, XRT has experienced a small counter trend rally.

This counter trend rally now has it testing the top of its falling channel at (3). If XRT can break out at (3), this hard hit sector has a chance of attracting buyers.

Below looks at retail stock Macy’s and how hard its been hit over the past couple of years (lost nearly two-thirds of its value). 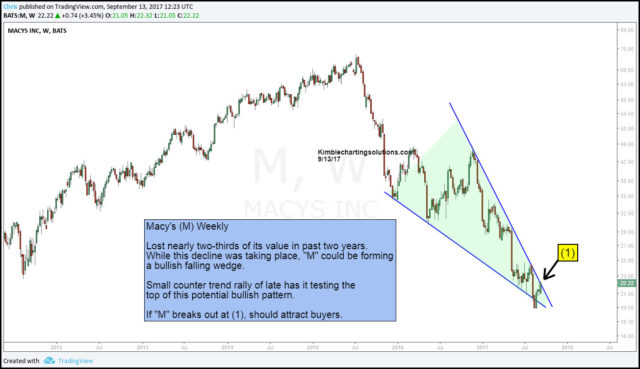 Macy’s could be forming a large bullish falling wedge over the past couple of years. “M” is testing the top of the falling wedge this week at (1). If it can breakout at (1) buyers could become interested in this hard hit sector.

Macy’s is one of six individual stocks the Power of the Pattern has been sharing the past few weeks with Premium and Sector Members, as out of favor stocks that could surprise the public to the upside.